Senso-ji is the oldest temple in Tokyo.
Known throughout Japan, it is the temple of Avalokitesvara Bodhisattva (Sho Kanzeon Bosatsu),
who embodies the mercy of all Buddhas.
This important center of religious faith draws 30 million worshippers every year.

Early in the morning on March 18, 628, when the capital of Japan was in Asuka, in what is now a part of Nara Prefecture, Hinokuma Hamanari and his brother Takenari were fishing in the Sumida River. Bringing in their net, they were surprised to see that it held one statue . When Haji no Nakatomo, village headman of what is now Asakusa, realized what they had was a statue of Avalokitesvara Bodhisattva (Sho Kanzeon Bosatsu),Kannon called usually.he devoted himself to Buddhism. He remade his house into a temple soon and devoted the rest of his life to worship and holding memorial services for this Kannon.

In 645, a Buddhist priest named Shokai came to this region and built a hall for the Kannon. Following a revelation he received in a dream, Shokai decided to hide the statue from view. Since that time, it has remained never unveiled.

Asakusa at the time was a small fishing village located in an estuary of Tokyo Bay in the vast wilderness of the area known as Musashino. It grew and flourished as people arrived in increasing numbers to worship. When Ennin (794-864), head priest of Enryaku-ji (the main temple of the Tendai School of Buddhism) visited Senso-ji in the mid-ninth century, he created a statue identical to the main image (absolutely Hibutsu) so that it could be shown rarely to the public.

During the Kamakura Period (1185-1333), the Shoguns demonstrated great devotion to Senso-ji. Gradually, other prominent figures, including military leaders and literati, followed their example, and the temple’s importance increased. In 1590 Tokugawa Ieyasu, the first Tokugawa Shogun, designated Senso-ji as the temple where prayers of the shogunate would be offered. After that the successive Tokugawa Shoguns had often visited Senso-ji and the belief in Kannnon of the Senso-ji had spread among common people during the Edo Period(1603-1867).
As from the end of the 18th century through the 19th century Edo city developed into the largest population city in the world , the culture specific to Edo flowered and Asakusa had become the cultural center in Edo.
In the modern times Asakusa has been the popular culture center such as theater,movie,music and vaudeville.

Senso-ji is the oldest temple in Tokyo and also called Asakusa Kannon because it houses the Kannon, It is known throughout Japan. This important center of worship draws 30 million visitors every year.

In the Main Hall (Kannon-do), there are two masterpieces of calligraphy by Noguchi Sekko, one of the Three Best Calligraphers of the Edo Period (around 1800). They were hung on each side of a large offertory box. The words are quoted from Hanjusan, written by Shan-tao (Zendo Daishi), an influential writer of the Pure Land School of Buddhism during the Tang Dynasty in China. They express the compassionate mind of this Bodhisattva Kannon, who treats everyone equally and with great benevolence.

Since renowned Buddhist priest Shokai decided to hide the Kannon statue from view in 645, it has been stored in a gorgeons zushi(miniature temple) with multiple locks which have prevented even the chief priests of Senso-ji from viewing it.

*To pray at the main hall, place your hands together in the Buddhist prayer position and chant “Namu Kanzeon Bosatsu, or “I place my trust in Bodhisattva Kannon.” 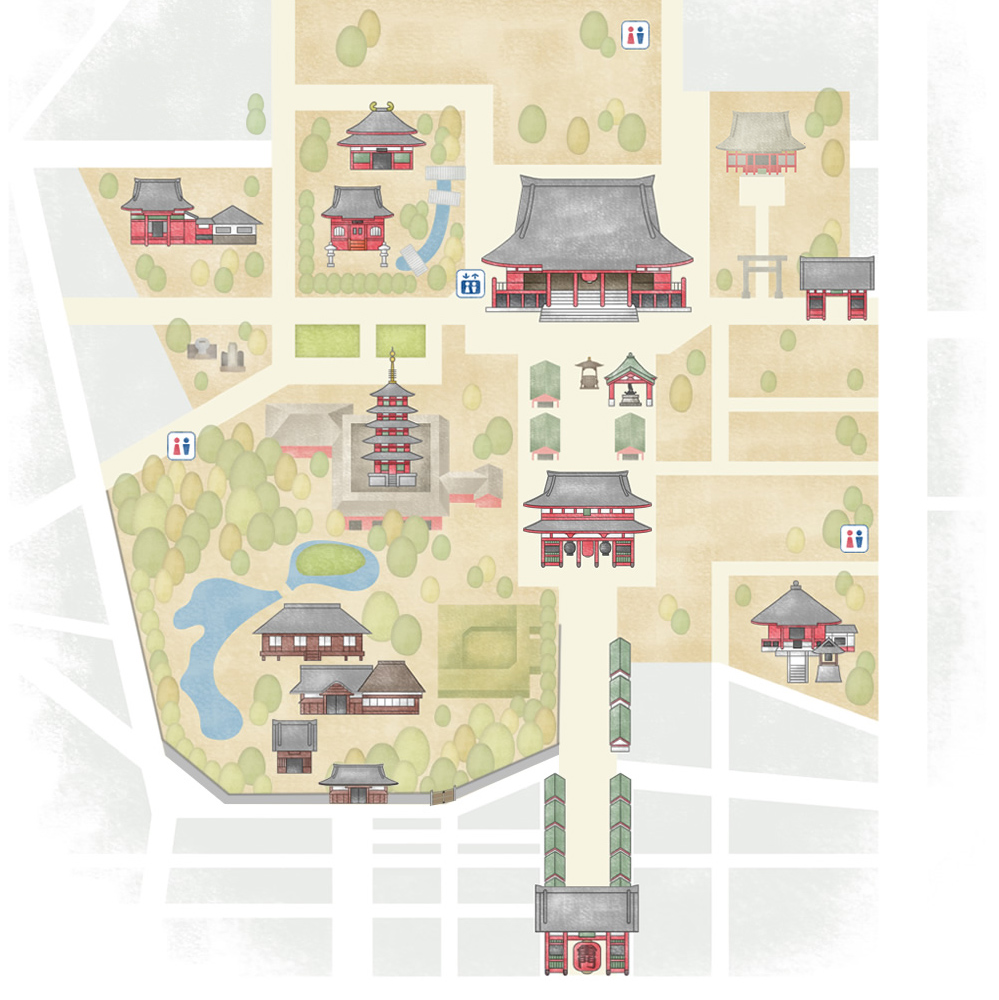 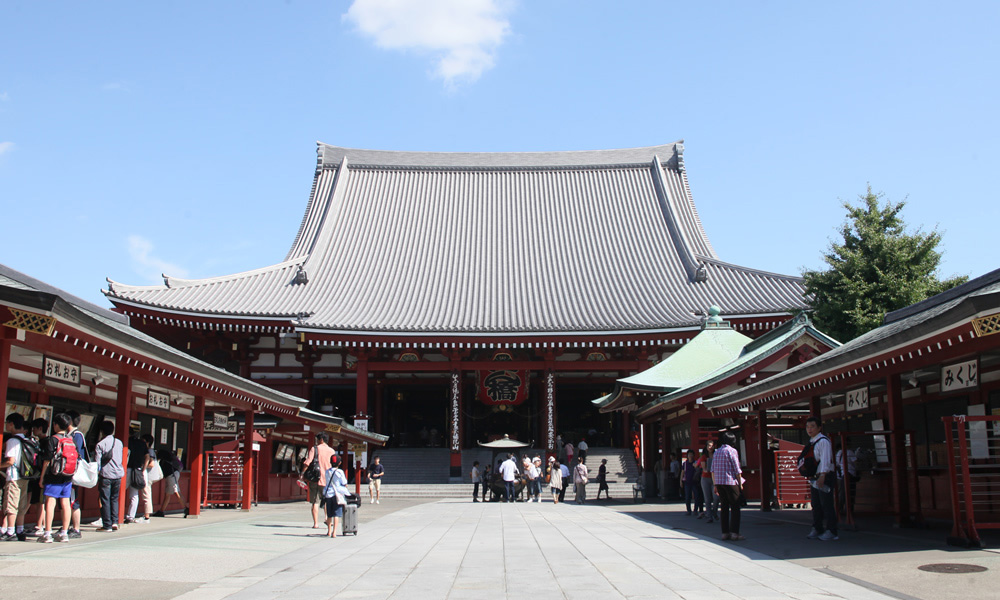 Built by the 3rd Tokugawa shogun, Tokugawa Iemitsu, and designated a national treasure, the Main Hall was destroyed in the Great Tokyo Air Raid on March 10, 1945. It was rebuilt in 1958 with donations from followers all over Japan.
The immediately apparent characteristic of the Main Hall is its dramatically sloping roof that is quite tall compared to that of other temples.
This hall is divided into the naijin (inner sanctum) and the gejin (outer sanctum). Senso-ji’s principal image, the Bodhisattva Kannon, sits in a miniature temple in the middle of the naijin. 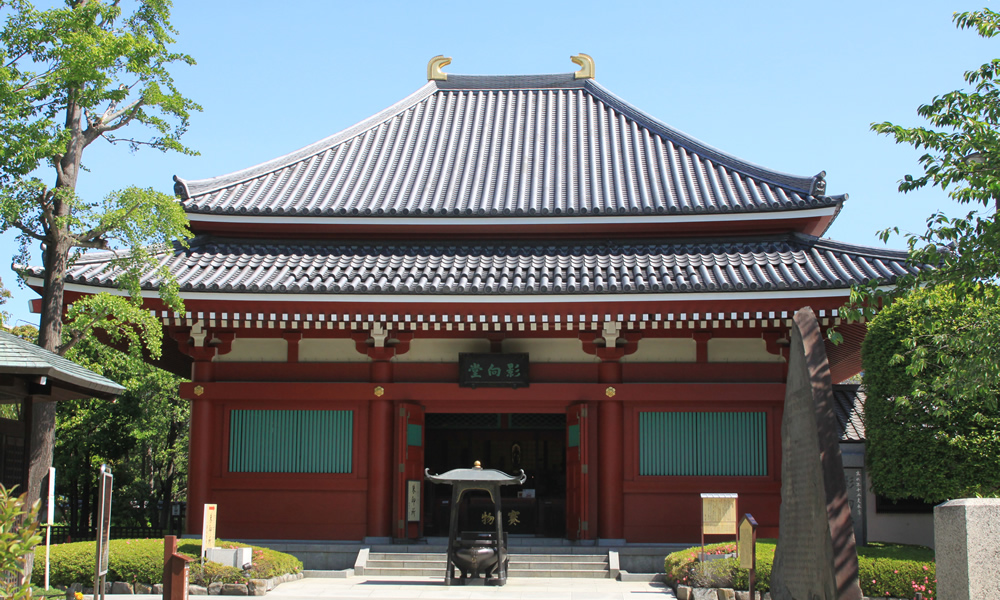 A group of Buddhas that follow the teachings of Bodhisattva Kannon and support the deity’s enlightened activity is called Yogoshu. Eight Buddhas are enshrined in Yogodo Hall, each of which protects one or two animals of the Chinese zodiac. In the Chinese zodiac, each of the years in the 12-year cycle is represented by an animal. The Buddha that protects each animal is also thought to protect those born in the year of that animal.
Stamps from the Senso-ji Scarlet Seal are available here. 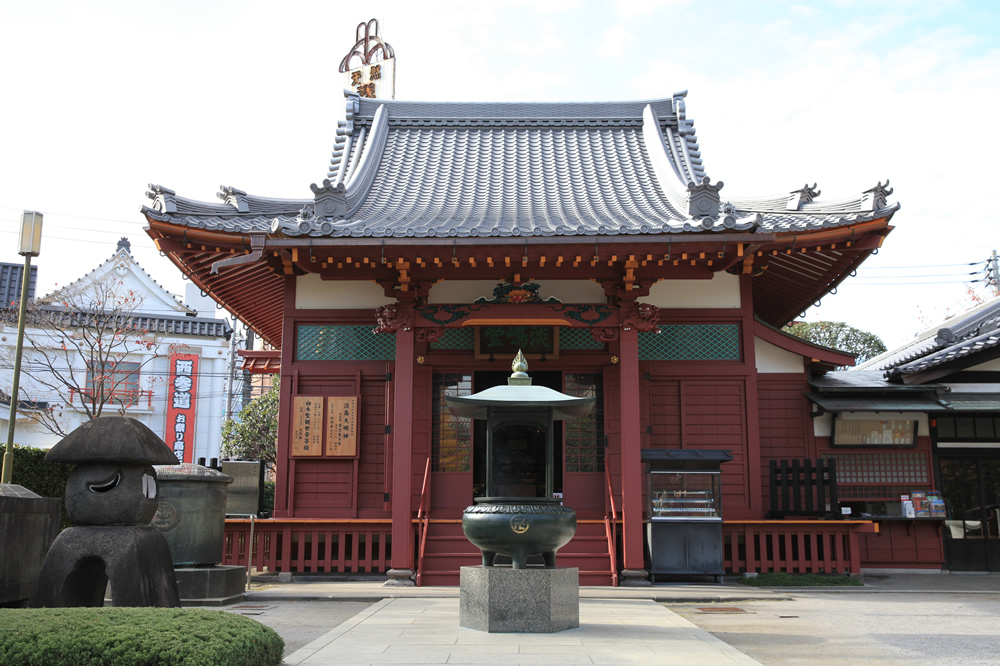 Awashimado Hall was built during the Genroku Period (1688-1704) to enshrine Awashima Myojin, a deity transferred from the mother shrine in Kada, Wakayama Prefecture. The principal image of Amitabha is placed in the middle with Awashima Myojin and Kokuzo Bosatsu (Ākāśagarbha) on its left and right. The current hall had been used temporarily as the Main Hall after World War II. It was moved to its present location and refurbished in 1994. 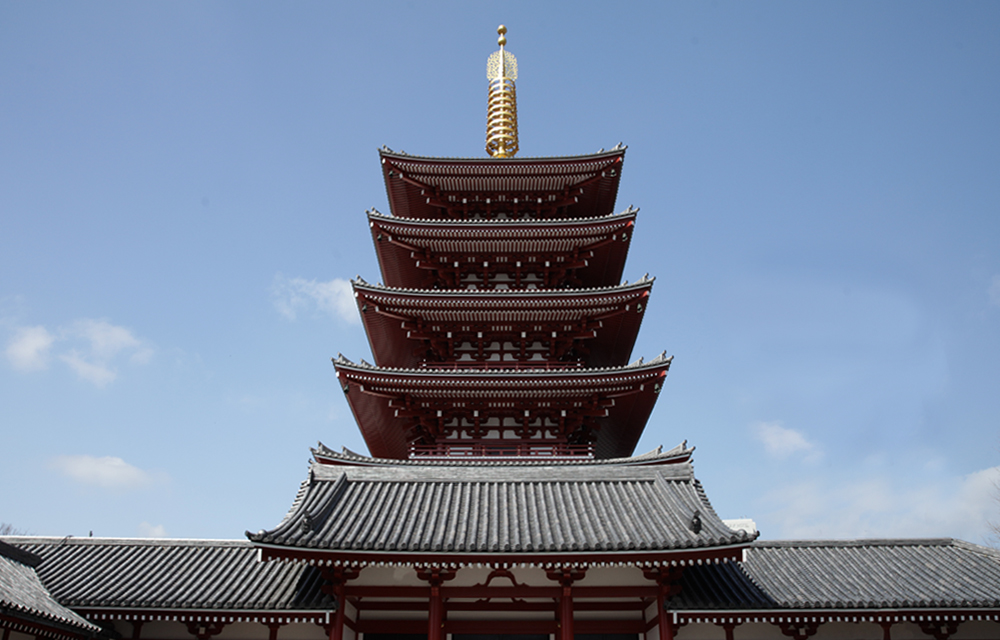 The Five-Storied Pagoda was first built in 942 by military commander Taira no Kinmasa. Tokugawa Iemitsu had the old national treasure rebuilt, but it was burned to the ground during the Great Tokyo Air Raid on March 10, 1945. It was rebuilt in 1973 with donations from devout believers around the nation. Busshari (Buddha’s ashes) were given as a gift from the royal temple of Sri Lanka. 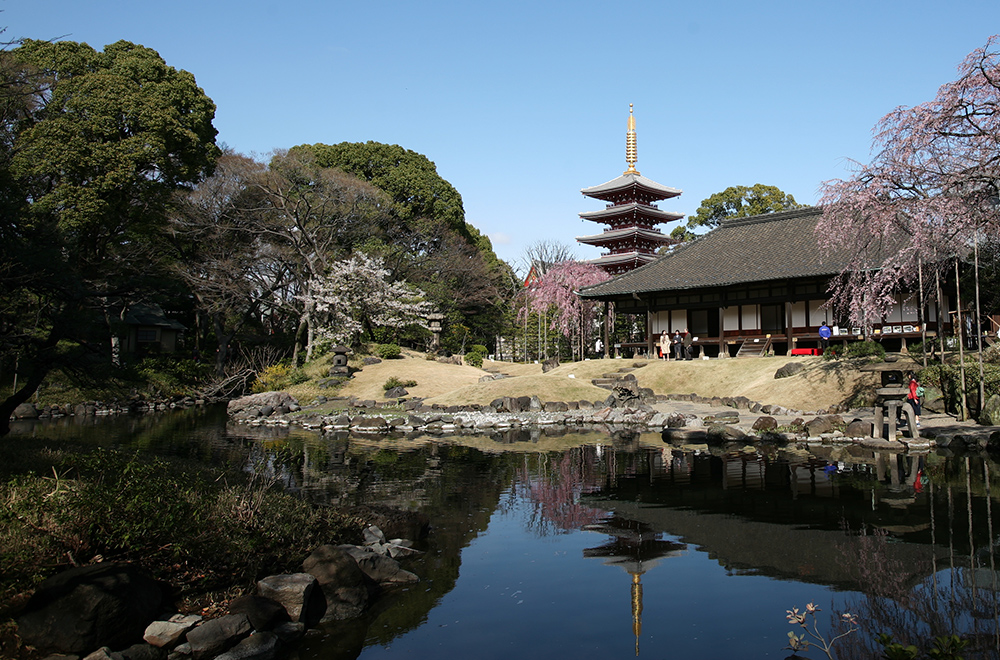 Demboin includes the Kyakuden (a building used to welcome guests), an entranceway, large and small Shoin (library and study rooms), and the Oima (living rooms) for the head priest of Senso-ji Temple. The Kyakuden was also used for memorial services and ascetic training. The Garden (closed to the public) has walking paths around a pond and is thought to have been built by Enshu Kobori in the early Edo Period (1603–1868). 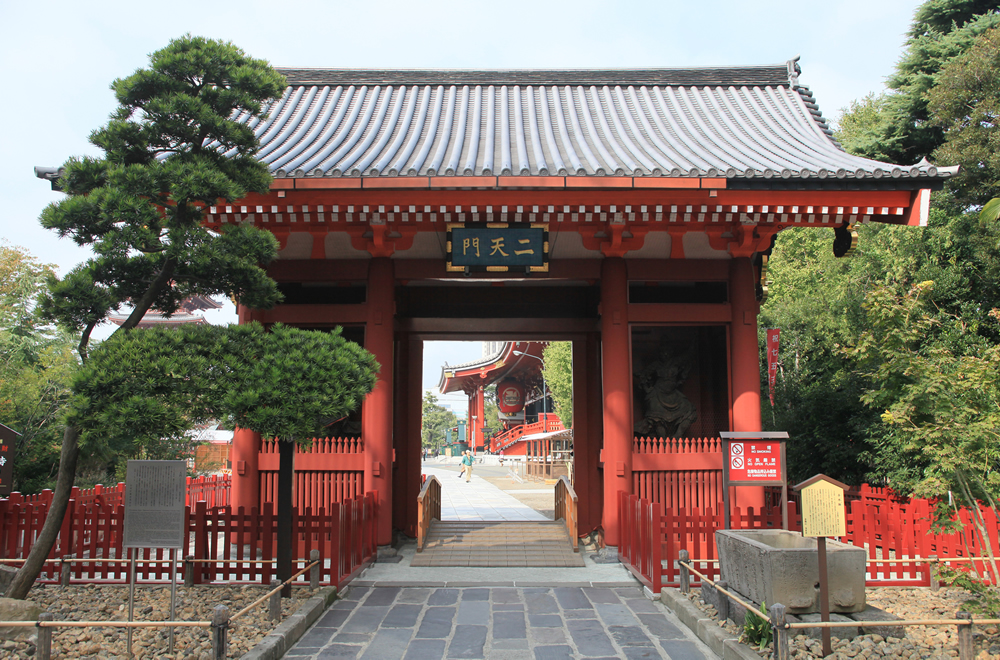 Niten-mon Gate was originally built in 1618 to protect the Tosho-gu Shrine in the precinct of Senso-ji . The current gate was built in 1649 as the East Gate of Senso-ji. In 2010, the gate was finally restored to its original state after repeated renovations over hundreds of years. Two protective Buddhist deities (“Ten”) called Zochoten and Jikokuten are positioned on the left and right sides of the gate. “Niten-mon” in Japanese means “the gate of the two Ten.” 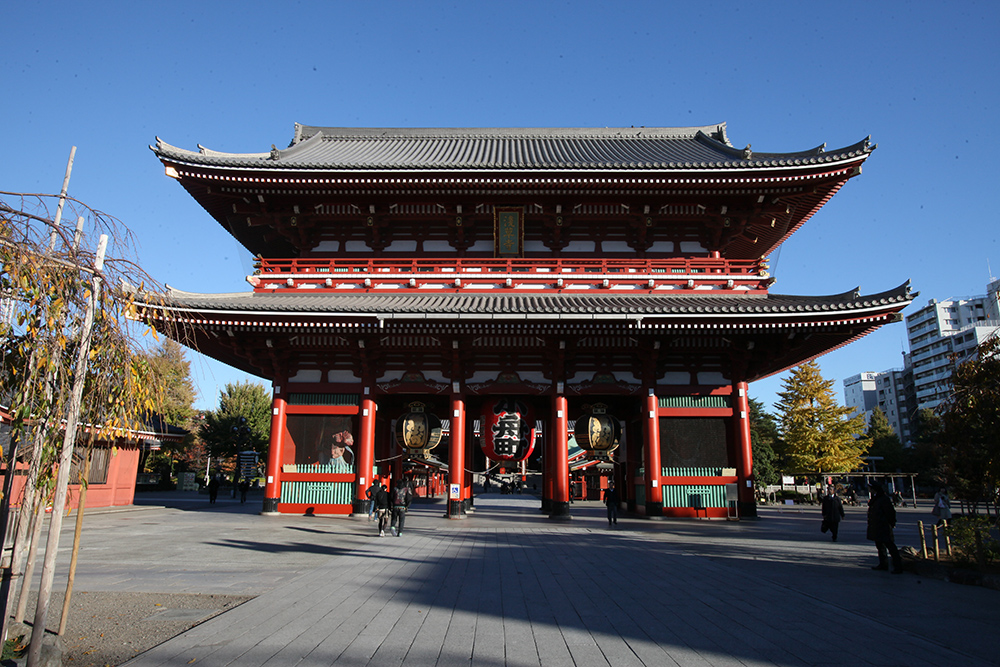 The original Hozo-mon Gate was built in 942 by the military commander Taira no Kinmasa. Tokugawa Iemitsu, the 3rd shogun of the Tokugawa Dynasty, advanced construction of the temple complex, and a new gate was installed in 1649. The current gate was rebuilt in 1964 with a donation by Yonetaro Otani, founder of Otani Heavy Industries and Hotel New Otani. 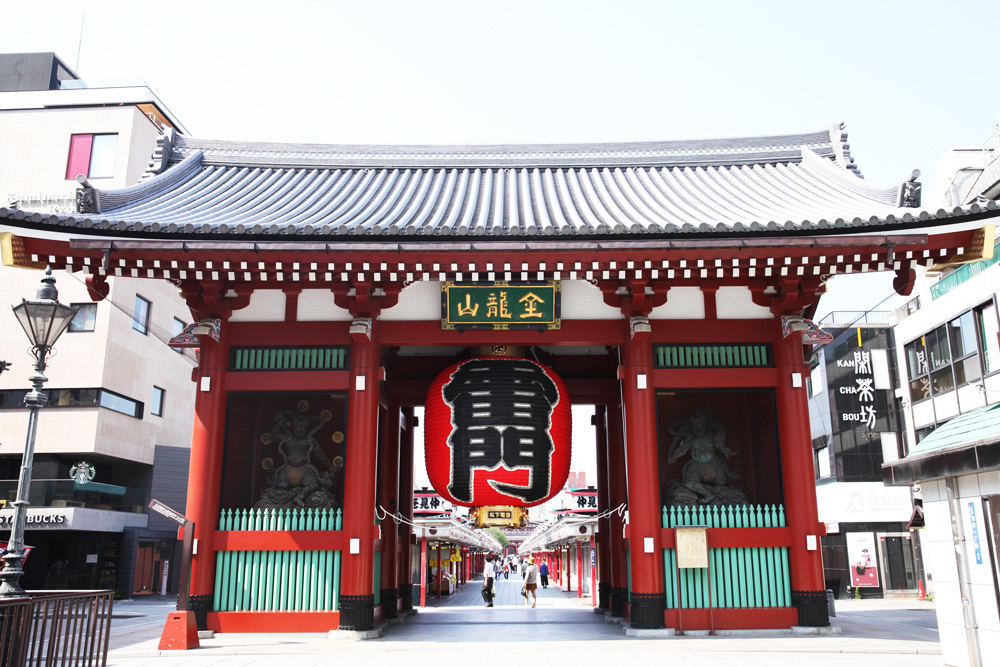 Originally built by the military commander Taira no Kinmasa in 942, Kaminari-mon Gate is the main gate of Senso-ji. Statues of Fujin (the god of wind) and Raijin (the god of thunder) were enshrined here to guard the temple from natural disasters.
The gate was burned down in a massive fire that had broken out in neighboring Tawaramachi in December 1865. 95years later,the current gate was rebuilt with a donation by Konosuke Matsushita, founder of Matsushita Electric (currently Panasonic Corporation) in 1960. 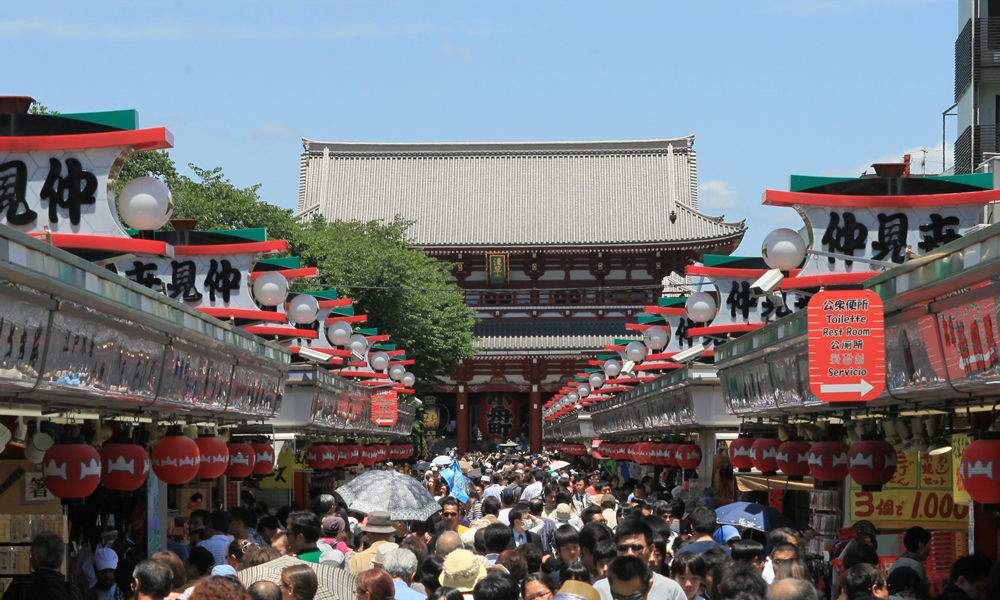 Nakamise is one of the oldest shopping streets in Japan. Traditional Japanese toys, cakes, and other souvenirs are all sold here. 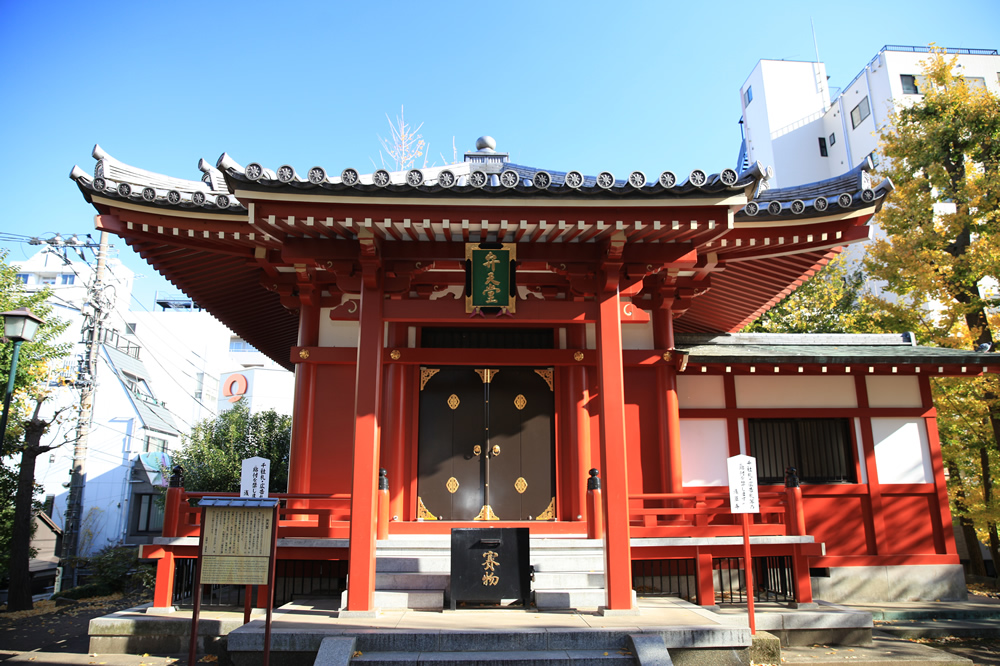 Bentendo Hall houses a statue of the gray-haired female deity Sarasvati (Benzaiten), well known as one of the three prominent statues of Sarasvati (Benten) in the Kanto region. The Bentendo Hall bell was re-cast in 1692 on the order of Tokugawa Tsunayoshi. The bell became known amongst local residents as “the time bell,” and it is also featured in a haiku poem by Matsuo Basho:
A cloud of flowers,
Is that bell from Ueno
Or Asakusa? 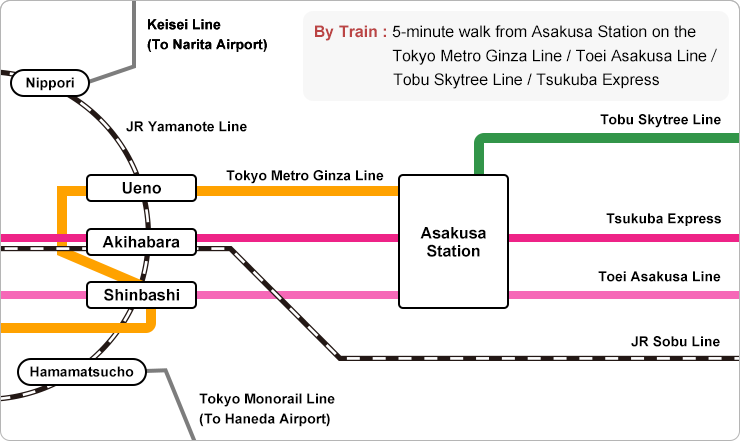 Name of the Temple
Kinryuzan Senso-ji

Founded by
Priest Shokai (Date of birth and death unknown)